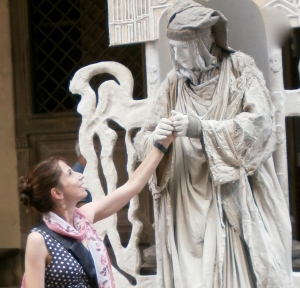 One night this summer, I was in a particularly nostalgic mood. I opened the box of post cards and letters people have sent me through the years. I sat down and proceeded to read through them all. There was one gleaming theme throughout the lot. They were all postcards people had sent to ME from various parts of the world.

I spread the postcards out on the floor. The sea of landscapes suddenly became a conglomeration. Sunsets, oceans, trees of various sorts, people wearing hand-woven clothes, mountains, small cities, large towns, neon signs, and markets faced me. And tiny scratches of words depicting world adventures hid underneath the mural.

So, in July, I decided to take a break from life, and escape to Italy. I didn’t tell many people, because they would judge me and ask me questions that I couldn’t answer. Was it Julia Roberts lamenting that she wanted to “marvel” at something? Or was it me, needing to be a random member of humanity, roaming the cobbled streets of Florence? I went by myself which caused many odd looks and comments like:

“What are you thinking?”

I guess at 42, I don’t feel that I need to explain myself. So, this is my clandestine trip being outed.

I hadn’t been to Italy in over ten years. But, somehow I knew it was the place for me to go. I got to the point where I had heard myself talk so much, that I needed the silence in my brain. I taught all year as if each day were the most important. I had to reply in graduate class with moderately intelligent commentaries. I had to be “on” during drama camp. I struggled to say all of the right things to my teenager. I was out of words. It was time to go.

I will admit that Elizabeth Gilbert described the Italian language well. Each Italian word floats on a musical note. You cannot speak Italian without sending each syllable off with a tiny bit of your spirit. Each word is a firework that escapes palate like powdered sugar. I knew my Italian would be rusty, but I also knew the Italians wouldn’t mind.

Too many words saturate the intended message. Not enough words leave people wondering. I always obsess over my words and how my thoughts are conveyed. Did I mumble? Did I ramble? Is the other person wanting me to stop talking? Did I unintentionally change the subject? Am I taking the focus off of them and on to me? So, it is best to just listen-something my life had not afforded me time to do.

I arrived in Italy on a rainy afternoon. The trip was difficult. I made it to the hotel. I immediately changed and headed out. I had limited time, and each moment was precious. I found a quaint restaurant that charged 15 EURO for an entire meal, including wine. I was transformed to an ambiguous entity. I owed no one, any words. 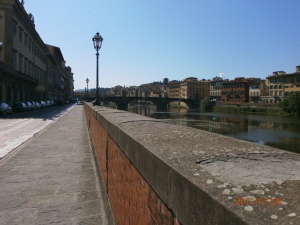 The next morning, I walked silently along the Arno. I was glad I wore the sandals instead of the wedges that looked better with my dress. The reality of my surroundings was more than my mind could take in. I walked. I watched people. Still, no words. I breathed in, and felt my heart swell with the realization that I actually did it. I made it. Italy.

I booked a trip to Cinque Terre. The day that I was to meet the rest of the tour group came quickly. There were two couples, the tour guide, and me.

One lady asked me, “Aren’t you scared to be alone?”

I hopped in the back of the tour van. I put the iPod ear plugs in, and commenced losing myself in scenery and music. I think they spoke to me, but soon realized I was tuning them out.  To my middle-aged surprise, the plastic surgeon lady asked me which college I attended, and she asked me what my major was.  It took a minute for me to decide whether or not to tell her a Winona Rider, Mermaids story. She steals the car, gets lost, finds suburbia and an ideal family who makes her dinner and listens to her tall tales.

I told her my age. I explained that I was traveling alone. She proceeded to tell me the what the wonders of plastic surgery could do for my face. A minute ago, I was a college student. Now, I was in desperate need of plastic surgery.

Somehow, when I travel, the fruit stands fascinate me. This one in particular was robust and popping with color. I wanted to jump in and roll around in it, but I was with a tour group; and they were rushing me. I soon dodged them, because I didn’t go to Italy to explain my whereabouts. I finally caught up with the group and the tour guide. He spoke to me in Italian. I understood. I was happy.

On the boat tour of the towns, one of the people with whom I was traveling asked me,  “Which stop is ours?” 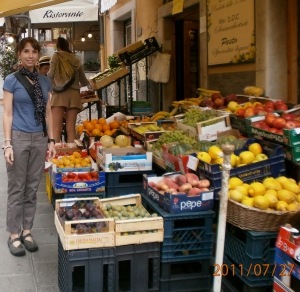 I said, “The tour group won’t leave us. Worst case scenario, we’re stuck in Cinque Terre. There are five towns. We are on number four. Odds are we could be in the right place. I’m getting off here. It is time for lunch.”

I sat, alone with the fish eyes staring. I cut off the head, put it on another plate so the mental montage of my experience wouldn’t end. Ocean to my right. Piercing blue sky above. Slight breeze. Bread. Wine. Some Italian words escaped my mouth. But that was all. I saw the people on my tour group walk by. Apparently, they weren’t vying to eat lunch with me. Maybe, the traveling alone bit confused them. Maybe, the decapitated fish head stared them down with its dead fish eyes.  I don’t know. I was lost in the grilled fish plate, soft bread, and the echoing water sounds. I stared at the water-color canvas of pink edifices, perched in layers, on the rocky cliffs.

How is it that this unbelievable beauty is right here in front of me? It was one of those “hard drive” moments. I use this term with my students when I want them to remember something, forever. Our “C” drive at school allegedly gets erased at the close of the school day, like the fine details that clog our brains. Anyway, I knew that I would revisit this scene in this microsecond of my life. It would come in handy, when Italy felt like a wrinkle in time. I sat there for a while. Probably a long while.  I couldn’t remember the last time I was able to sit still.

I had scheduled a trip to Chianti for wine tasting. I made it to the bus station. No tour bus. So, I pouted all the way back to the hotel. The man behind the desk asked me where I had been because he was on the phone with Chianti guy. They left. I got my money back.

I had to reprimand myself for pouting in Italy. I was being a brat. So, I decided to go to the Uffizi gallery, as if it were just down the street. Wait….it was.

I paid a bit extra to go to the short line after I spent time with the fascinating statue people.

I believe the security in the Uffizi is more intense than at the air port, where they wave and say CIAO as you walk through security. The group in front of me didn’t see the huge red circle marked-out signs for cameras, phones, and all electronics. Security guy was yelling in Italian. Tourists-snapping back in Chinese. I just wanted to get inside already. The teacher in me came out as if I were Sybil, and I had no control. I pointed, slowly to the signs, then to the extreme electronic paraphernalia attached to their bodies. The animated security man waved them in. I motioned to my self, showing that I had no banned electronic devices on my person, and that I had followed directions. Gold star.

I found the Botticelli room. I stood in front of Primavera. My eyes welled up, and  I felt as if my feet were rooted in the floor. I had always heard about people becoming emotional over art. But, now it was me. I stood there, just staring at something bigger then everyone in the room. I guess this was my marvel time. I looked around and saw other people staring, tearing up, motionless-and a few minutes ago I had been pouting about a missed Chianti bus. Shame…shame.

The last day in Florence, I sat on the Ponte Vecchio, listening to an Italian band cover American songs. People walked by. Kids danced. New tourists came, dragging luggage behind them. My words were coming back. I could start again. I had not been alone, in my thoughts for years. I hadn’t worried about a thing, except for the next best restaurant.

The minute the plane hit home, Italy became a memory. It is amazing how the mind can be emptied and re-filled in a mere moment.

But, I have a piece of Florence with me. Perhaps the string of lucid moments, gave me a distinct perception of my small place in the world. Even if it is in the silence of my own mind, without words.

There wasn’t a class for that!

It's all about disbelieving your thoughts